Eyde in the EU: Much more focus on alliances than before

In September, the Eyde cluster's board and secretariat participated in meetings with the European Commission, European organizations and the EU delegation in Norway House in Brussels.

The topic of the meeting was the cluster's strategy in the face of challenges such as the electricity crisis, access to raw materials, the climate and investment in batteries.

- Do not sleep during class

- It is very important to follow what is happening, and there is an enormous level of activity now because of the power crisis that we are in the middle of. I think that for Norway as a country, it is incredibly important not to sleep in class, but to follow what is happening in Europe. Now a lot is happening in the future, so it is very important to be present here and hear what is going on and to establish networks, says Helge Aasen, chairman of the board of the Eyde Cluster and managing director at Elkem.

The EU has brought forward again the industrial strategy that was put forward in 2020, but which came in the shadow of a pandemic and war.

- Now the EU is ready for a more powerful strategy to ensure that Europe becomes independent, especially from China in relation to access to raw materials and Russia in terms of energy supply. The crises have shown that Europe can stand together, says Falch Fladmark.

- It would have been an advantage to have been part of the EU, and helped make the decisions instead of being put on the sidelines. But I have the impression that we are invited to the most important arenas, adds Aasen.

According to Trade Councilor Tymon Bugajski, from the Ministry of Trade, Industry and Fisheries, the European Commission wants to develop strong European value chains in strategically important areas such as batteries, raw materials, hydrogen and pharmaceuticals, and has therefore created IPCEI - Important Projects of Common European Interest as an instrument for powerful investments.

He sees that there has been an interesting turn in European politics. Now there is much more focus on trade agreements and alliances with third countries, which have not been talked about for several years.

- Støre and von der Leyen launched a "green alliance" between the EU and Norway this winter, and now we are concretely working on an industrial partnership agreement with a focus on raw materials and batteries. Among other things, Norway can participate in the European Battery Alliance. Right now we are working on an agreement text (a so-called MoU in EU language) and a joint road map. There is ongoing work to involve industry players to get it as concrete as possible. Among other things, we will arrange match making between Norwegian and European players. I am quite sure that we have a process that is positive, says Bugajski.

The situation on the electricity front was also an important topic during the EU meeting. That the EU is in an energy war is rather a sober description of the electricity situation in Europe. The threat that Russia can close the gas taps at any time makes it even more precarious to find alternative energy solutions.

- Not many countries have as large an energy surplus as Norway, and the commission has set concrete targets to reduce consumption, says Energy Councilor Ragnar Semundseth.

And the EU is launching gigantic investments in renewable energy and energy storage: both solar, wind, biogas and hydrogen production.

The high electricity prices now are costly for the environment. When electricity is expensive, coal is used to a greater extent as fuel in industry, leading to more CO2 emissions. Climate and environment councilor Birte Ivars sees a frightening development. That is why collaborative projects in the EU on, among other things, the circular economy are so important to counteract the negative spiral, and the European Commission plans to present a new circular economy package during the winter.

- Europe's green deal will take the EU to climate neutrality by 2050. But that requires coordination across policy areas, says Ivars.

She believes that a review of all regulations in climate, chemicals, natural diversity, water, sea, air, soil, sludge, CO2 standards and more is needed.

- Intensification will lead to green solutions within several sectors, in industry and the financial industry, she believes, and points out that Norway, with its national strategy for a green circular economy, is being noticed in the EU.

The importance of coming together in partnership, across national borders, in order to stand strengthened in Europe, was highlighted several times during the meeting.

One of the EU partnerships is Process 4 Planet, which wants to create a development in line with the Paris Agreement in the process industry. Angels Orduna, who leads A.SPIRE, the private part of the partnership, has together with the European Commission created the strategy for this to become an important part of the Horizon Europe Program with approx. €1.3 billion in budget. The Eyde Cluster is a member of A.SPIRE, and Christophe Pinck 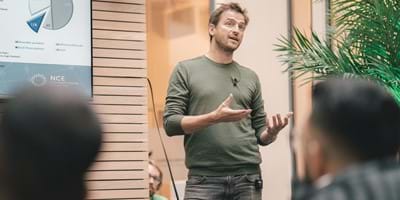