Morrow Batteries, a new battery company registered in Norway, will build and rapidly scale up battery cell production in Norway in the coming years.

The factory will be situated in Agder, in the Southern part of Norway. This region has a long tradition and a strong base of globally competitive electro-chemical process industry. This will help secure the factory with a highly skilled and experienced workforce. The Eyde Cluster has being consultants and will serve the factory with technology competence and EU policy and development concerning battery technology and the marked.

- In this project, our members have been contributors building up what we call the eco-system of batteries in Agder; a cooperation between companies in the southern part of Norway, such as Agder Energi, Elkem and Glencore Nikkelverk, says Lars Petter Maltby, chief of Eyde Innovation Centre in Eyde Cluster.

The company initially plan to produce battery cells based on best available conventional technology. However, it also aims to develop and industrialize next generation Lithium-Sulfur batteries which will both significantly improve the performance of the battery and significantly reduce its environmental footprint.

- We are electrifying important operations in our society. Sustainable battery production will be huge competitive advantage in this change-over, says Bjørn Rune Gjelsten in a press release by Agder Energi, who is the owner of Morrow Batteries together with investor Bjørn Rune Gjelsten, who is well known for building up industries in Norway.

Morrow’s R&D team has for nearly a decade worked to develop the Lithium-Sulfur technology and has achieved significant technological breakthroughs that have been independently validated by Fraunhofer, Europe's largest application-oriented research organization.

The giga battery cell plant will have a significant surplus of competitively priced renewable energy, situated in Agder. Agder Energi is one of the largest producers of renewable energy in Norway. It is also very close to a number of suppliers of critical raw materials and key European markets. This will enable the factory to become both highly cost competitive and one of the greenest battery factories in the world. Significant amount of upstream processes such as precursor preparation and active material synthesis, to the actual cell manufacturing and close loop recycling, will be 100% powered by renewable energy.

A battery project initiated by the Eyde Cluster, BATMAN, can be a good support in developing the technology needed for making a more sustainable battery. This project are investigated how to make use of old batteries, and reuse the raw materials.

- We will support the project with competence on the existing value chain in Norway and Agder, and through the BATMAN project we can give insight in the need for green batteries in Europe for the future,  says Stephen Sayfritz, project leader in the Eyde Cluster.

- This will make the production greener, cheaper. circular and with less CO2 footprint, points out Sayfritz.

In addition to the Eyde Cluster, Innovation Norway and SINTEF are also coworkers, who are already in to the project. 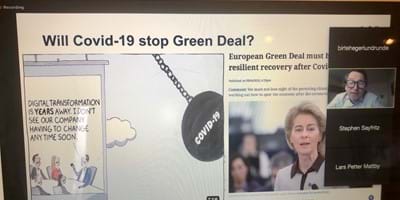 Focus on batteries in Europe after the corona crisis